Twitter Will Now Prompt Users to Read Articles Before Sharing 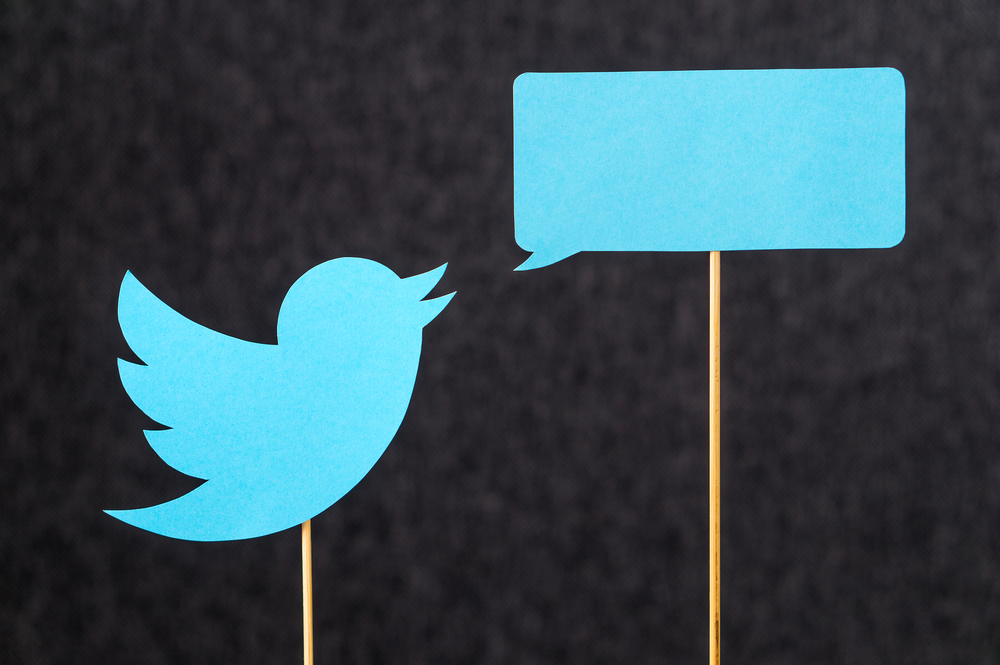 Micro-blogging site Twitter announced a new feature that will prompt Android Twitter users to read an article before retweeting it. According to Twitter’s official announcement, “Sharing an article can spark conversation, so you may want to read it before you Tweet it”.

With this feature, when you try to retweet an unopened article, Twitter will ask whether you want to open it first. Twitter will show a notice encouraging you to read the article only if you haven’t clicked the article from a Twitter link. However, this new prompt will not stop a user from resharing a link that they haven’t opened, instead, it just suggests the user to open the link and read it and also allows the user to click through.

After years of criticism about the ways it fuels angst and eternizes disinformation — Twitter seems like it’s trying to make its platform a better place with this new feature. Followed up with a tweet that explained that the goal was to “improve the health” of the discussion, the company is testing this feature to restrict the spread of fake, harmful content and promote informed discussion on the platform.

Through their official announcement, Twitter said that this is an experimental feature and that they’re limiting it to Android users in English, presumably to work out any bugs.

As often people share a link without reading the article, it results in clickbait titles getting widely promoted regardless of the content. Clickbait is generally created to trigger an emotional response by confirming or sabotaging a belief while the article itself might turn out to be less than what the title promised, resulting in the clickbait title becoming the message even when that message is fallacious.

In fact, the problem of users retweeting links without even opening them is not a new concern. A study reports that 6 in 10 people share news links on Twitter and Facebook, without ever having read them. In 2016, computer scientists at Columbia University and Microsoft conducted a study and found that 59% of links posted on Twitter are never clicked.

In the same year,  The Washington Post reported that the satirical news site the Science Post published an article which was actually just a block of ‘lorem ipsum’ text, under a headline: “Study: 70% of Facebook users only read the headline of science stories before commenting.”  The most interesting fact about this post was that it was shared by nearly 46,000 people.

However, with this new move of Twitter, clickbait titles can be avoided to some extent.

Major Issue in the New Feature

Some people doubted that Twitter was tracking user clicks to see if they had read an article. Some tweeted that they read newspapers outside of the Twitter ecosystem. So, if they share something that they read outside of Twitter it will cause a prompt from Twitter to read the article. 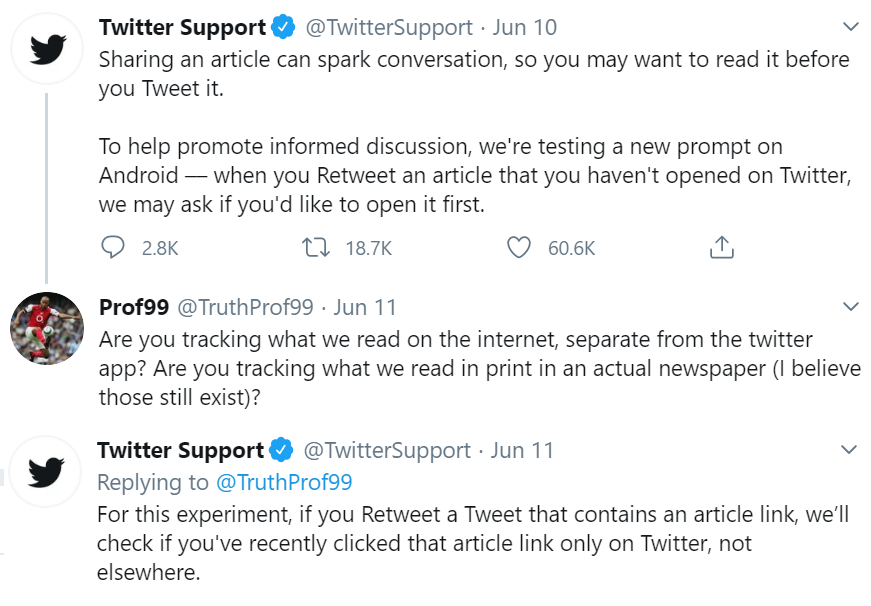 But, Twitter cleared all the doubts by stating that, the platform will only check if the user has recently clicked the article link on Twitter, not elsewhere on the internet. Twitter will not track what users do on another site.

Some also accused Twitter of creating a new way to show more ads. However, Twitter denied this allegation as well by saying that the platform is not testing ad products with the prompts.

In May 2020, Twitter announced a new feature, that will allow users to limit who can reply to their tweets on Android, iOS and web apps. The new feature will let the audience like and retweet a post but they will not be able to reply to the tweets. This feature is currently available to a very small number of people globally. However, it is going to be useful particularly to public figures on Twitter including journalists, actors, and politicians. In addition to that, Twitter is testing a new option that will show its users posts retweeted with a comment. 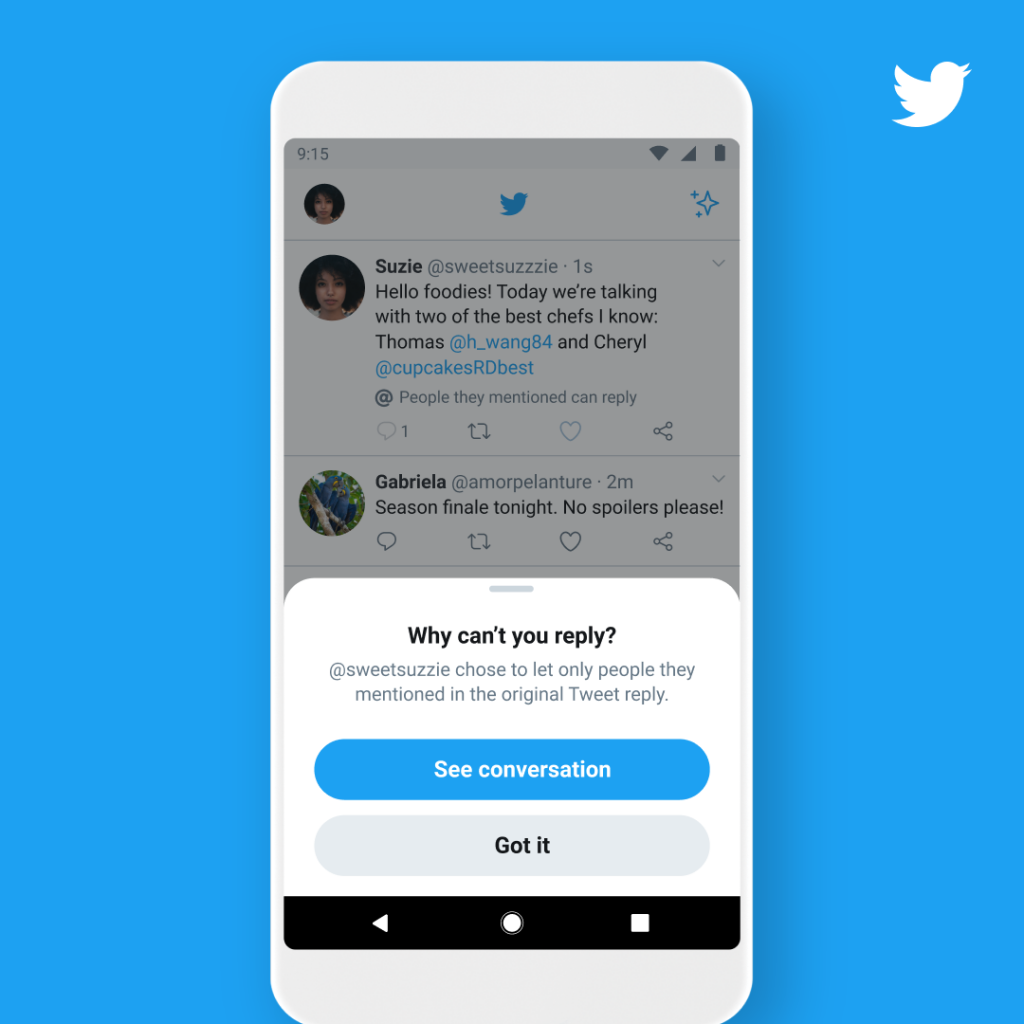 Twitter has launched this new feature “Read Article before Retweeting “  with a good intention to encourage informed discussions. If it works well, many people are likely to welcome better discussions, while some had already started complaining about it.